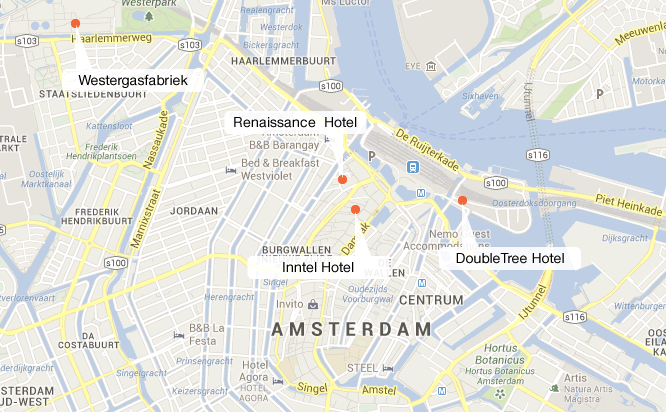 UX in the City

The Great UX Debate by SapientNitro takes place at the Rode Hoed (Red Hat), which houses the largest and oldest remaining hidden church in the Netherlands.

Behavior Design AMS is hosted by info.nl, one of the leading full-service online agencies in the Netherlands. Their office is located near Nieuwmarkt, right in the heart of Amsterdam.

Amsterdam UX Cocktail Hours is hosted by Osudio in the former Strawberries office in De Ruyterhuys on the IJ waterfront. With the recent merger of Strawberries and Softlution, Osudio became one of the largest e-business specialists in Europe.

Chi Cafe is hosted by STEIM, an independent electronic music center unique in its dedication for live performance. Their office is situated on Achtergracht.

The Appsterdam Meetup will take place in Appsterdam HQ, which is located in the A Lab building on flourishing Overhoeks north of IJ, just a stone’s throw of the striking EYE film museum. Free ferry ride!

The screening of the documentary Making Progress is hosted by Q42 in their brand new office inside Pakhuis Argentinie. It’s so new that Google Street View doesn’t even know about it. Comes with a swing and a slide.

Coroflot Connects takes place at the Rode Hoed (Red Hat), which houses the largest and oldest remaining hidden church in the Netherlands.

Take bus 21 towards Central Station and get off at bus stop ‘Marnixplein’.
Google Maps.

For Interaction14 attendees with a regular conference ticket there will be transport arranged, leaving the Westergasfabriek at 18:00 for a touristic city trip.

Het Scheepvaartmuseum is approximately a 15 minute walk from Amsterdam Central Station. To reach the museum you can cross the Prins Hendrikkade or take the route passed the Amsterdam Public Library. The museum is also easy to reach by public transport. Bus 22 (Indische buurt) and bus 48 (Borneo Eiland) depart from the Central Station stop in the Prins Hendrikplantsoen across Victoria Hotel. Both buses stop close to the museum at Kadijksplein.